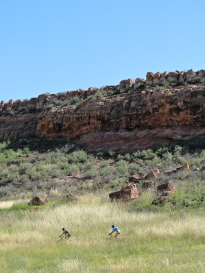 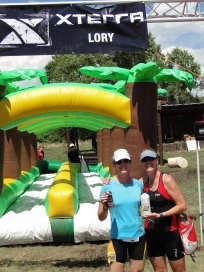 Life Busers at the finish line 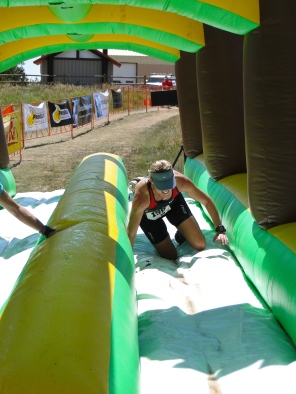 Trying to slide on the slip-n-slide 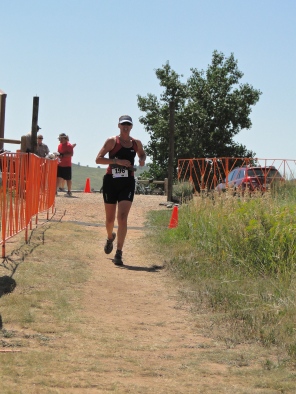 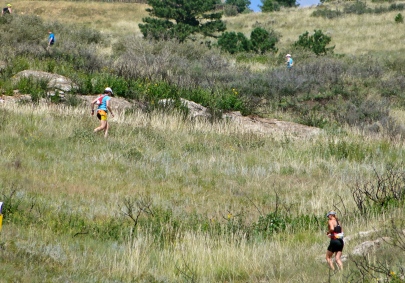 Boys trying to pass me 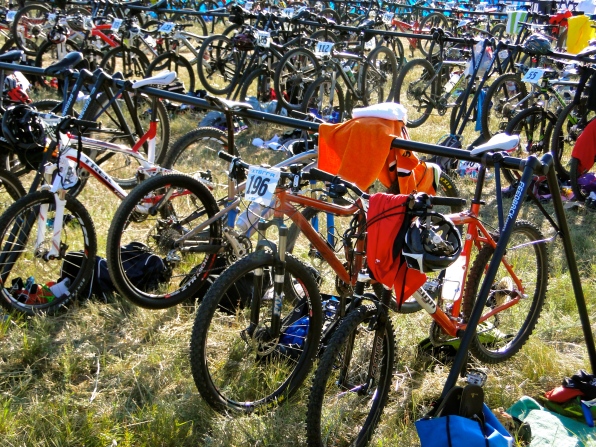 #196 in the transition area

Yes, it finally happened!!  I successfully competed in my first trail triathlon.  I consider it a success because I actually got up that morning and went forward with the plan.  Even though everything inside of me was saying let’s just have coffee and forget about this triathlon nonsense, I actually showed up at the start line.  I also consider it a success because, as my husband said, I didn’t leave any DNA or DNF on the course.  (DNF meaning Did Not Finish.)

To my good fortune, I had roped fellow LIfe Buser and Alpine Rescue teammate, Lynda,  into doing the race with me.  If any of you have followed her posts on the Life Bus you know that Lynda is about as dedicated to self-torture as it gets and definitely not a quitter.  At about 4 AM I told myself that if Lynda answered the phone on her way to the race I would have to do the race too.  Of course, Lynda answered the phone.  In a very cheerful voice, one that belied it was 4 AM, she said she was on her way .  With that, I knew I was stuck … I would have to do the race.  In all honesty, I’m so thankful Lynda did answer the phone.  Participating in my first triathlon with a dear friend was a great experience.

Back in May I wrote a post about my training for the Lory State Park Xterra Triathlon.  I was diligently training in the snow, freezing water, rain, etc.  The race was originally scheduled for June 1st, 2013.  Imagine my chagrin when, 3 days before the event, racers received an email stating that the race was rescheduled for August 10th.

Earlier in the spring, Lory State Park suffered quite a bit of damage from a wildfire.  During that fire many bridges on the trails were burned.  These bridges were critical to the triathlon course.  Apparently, the park ran out of government funding and couldn’t rebuild the bridges before the originally scheduled race date.  Racers could either get a refund or opt for the rescheduled date.  I went with the latter.  I thought it’s summer time, I’ll be exercising and able to keep up my training regimen.  Nothing could have been further from the truth.  My interest in training began to wane and I went on a 2 and a half week European vacation where it was hard to focus on training instead of eating my favorite foods such as German pretzels with butter, chocolate, croissants, cheese, schinken, German pastries, gelato, etc.

And so it was, that I found myself at the start line on the morning of August 10th with only 2 weeks of training in the last 2 months. Despite the fact that I was wearing one necklace that said carpe diem and another in the shape of a horseshoe, I was in need of some true inspiration.  Lynda came through for me. While we were standing around waiting for our swim heat to go, I asked her why she participates in all of these tests of human will.  Her response was what I needed to hear and the motto of a true Life Buser.  She said she does these because she likes to test her fears, to push herself beyond her boundaries, and to try new things.  She said you will be a different person on the other side.  It was just the Life Bus motivation I needed.  I was mad at myself for briefly forgetting these values.

The race was hot and hard and challenged me.  There were surprises along the way.  The event I feared the most, the mountain biking portion, turned out to be my best.  I felt emboldened on that course and not fearful in the least.  The run, which is usually my best event, spanked me.  Primarily because it felt like 100 degrees outside and the first 2 miles climbed 600 feet in elevation.

I was thinking of quitting during the last mile or so because I was so hot and miserable.  All I could think of was I will never do one of these again.  I knew, however, I couldn’t quite.  My husband would never let me live that one down.  Once I was across the finish line I knew Lynda was right, I was a changed person.  I stepped out of my comfort zone, faced my challenges, tried something new, and most importantly believed in myself.  Carpe diem!!  Will it surprise you to know I’ve already found two new Xterra triathlons that I plan on doing next summer.